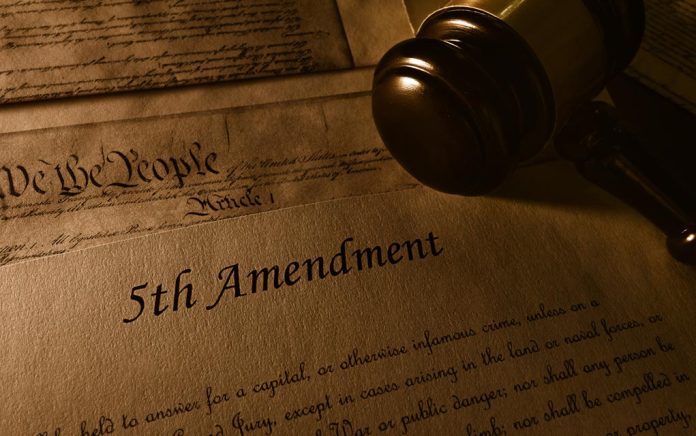 (WatchDogReport.org) – A steady stream of witnesses in courtroom dramas and congressional hearings who “plead the fifth” have focused public attention on the Fifth Amendment. However, not everyone truly understands the meaning of this vital provision of the Bill of Rights. What does it really mean when someone “pleads the fifth,” anyway?

The Fifth Amendment doesn’t just allow for the right to plead the fifth. Instead, it enshrines a total of five distinct protections, each with a slightly different scope from the rest.

Initially, the Fifth Amendment only applied to federal courts. The US Supreme Court later incorporated portions of the first 10 amendments to states using the 14th Amendment’s Due Process Clause.

The prohibition against double jeopardy, safeguards against self-incrimination, and restrictions against the seizure of private property apply to all the states under the incorporation doctrine.

What Exactly Does It Mean to ‘Plead the 5th?’

Defendants and witnesses in criminal and civil cases have the right to refuse to testify in courtrooms, grand jury hearings, depositions, and other legal proceedings. This is what is referred to as “pleading the 5th.”

Prosecutors and judges cannot force a witness to take the stand and offer testimony in criminal cases. This prohibition also applies to defense attorneys.

Witnesses can be forced to testify in civil hearings, but not if their testimony could lead to possible criminal charges. And this prohibition applies even if the potential criminal charges are unrelated to the current case.

Additionally, the US Supreme Court ruled that juries can’t consider the refusal to testify when deciding the defendant’s guilt or innocence.

You have probably heard defendants on television saying, “I plead the fifth” while being questioned by prosecutors. They are essentially refusing to testify as is their right under the law — usually to avoid self-incrimination.

As an American, it is essential that you know and understand the Bill of Rights. The Fifth Amendment is just one part of a much larger set of rights afforded to you by US law.