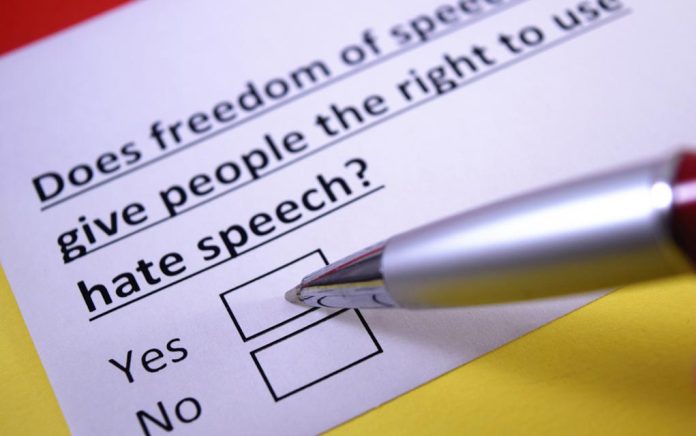 (WatchDogReport.org) – One of the most divisive topics when talking about the First Amendment today revolves around hate speech — what is it? Is it legal?

The truth of the matter is, outside of a few extreme exceptions, the Supreme Court of the United States (SCOTUS) has consistently upheld that hate speech protected under the Freedom of Speech clause.

From the very founding of this nation, the idea that a person is free to speak their mind was ingrained into its collective soul as a means of preventing a slide back to the totalitarian governments left behind in Europe. It was Benjamin Franklin who said, “whoever would overthrow the liberty of the nation must begin by subduing the freeness of speech,” which is just another way of saying one of the prices of freedom is listening to words that one might find offensive.

Over the centuries, SCOTUS has continued to refine the law to show when the government interests warrant suppressing this right. A non-exhaustive list of these include:

Where It Stands Today

The court continues to refine what “imminent” means in real-world applications. In a unanimous 9-0 decision that came out in 1992, the Justices said the arrest of a group of white teenagers for burning a cross on the lawn of a black family was illegal due to First Amendment protections.

Most recently in 2017, a case came before them about a band that wanted to trademark their name “The Slants” but were turned down by the office because they felt it might be offensive to “persons of Asian descent.” In an 8-0 ruling (Justice Neil Gorsuch had not yet taken his oath of office when oral arguments were heard), they said a department of the government cannot use that type of reasoning for their decisions.

Nearly everybody has seen a movie or read a book that describes a dystopian future where only one group gets to decide what is and what isn’t “wrong.” In the sociopolitical environment of America over the last several decades, it’s become the norm for a person who expresses an opinion some people decide is racist or homophobic to be attacked, and with the advent of social media platforms, that person becomes the target of a metaphorical cry of “off with their heads!”

A country that takes a knee in the face of threats of violence is no longer a nation of freedom, but rather one that’s sliding down a slippery slope towards oppression. That’s why it’s vital to protect the rights of people to speak their minds, no matter how vile or offensive that they may appear to be.