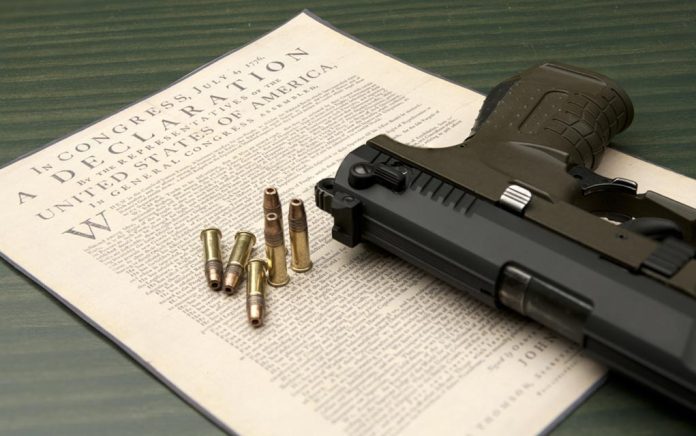 (WatchDogReport.org) – The Founding Fathers who declared that this country was no longer a part of the British Empire via the Declaration of Independence in 1776 also developed a framework of the laws for this new country. These applied to the assemblage of the thirteen states that existed at the time. They later added 10 amendments delineating prohibitions upon government action — we now collectively call these the Bill of Rights.

Today, people often say things like “I have the right to…” which strongly implies that there’s a question as to whether or not it’s true. But if one reads the Bill of Rights, they’ll note it’s worded in such a way, that it’s clear the framers believed the rights were inherent and proscribed government action against them.

The Second Amendment to the US Constitution reads, “, being necessary to the security of a free State, the right of the people to keep and bear Arms, shall not be infringed.” There’s a good reason for the strikeout of the first clause and that’s because the Supreme Court of the United States (SCOTUS) effectively did just that in their decision of the District of Columbia v. Heller case in 2008.

For decades, the opponents of the Second Amendment focused on the argument that ownership of a firearm had to be related to military or paramilitary service. SCOTUS held here that it’s a “prefatory clause” meaning it has no bearing on the rest of the text. In short, the various levels of government have no business trying to keep law-abiding Americans from owning guns.

Every time a tragic mass shooting takes place, be it a school like Sandy Hook or a country music concert in Las Vegas, it seems like the Liberal Left just uses the same script, but changes the location. They use catchphrases, that at first blush appear correct, but in reality, are simple platitudes to advance their Agenda.

This includes questions like: “why does anybody need an ‘assault weapon’ to go hunting?” In essence, they’re pretending the law only applies to activities like sports shooting and food procurement. Nobody’s arguing that these shootings are anything but horrific tragedies, but as the SCOTUS ruling shows, the law isn’t about inhibiting the rights of the many because of the actions of a handful of sick and twisted individuals.

Returning to the Heller case gives us a clear view of how SCOTUS read the Second Amendment, albeit in a 5-4 ruling. Justice Antonin Scalia wrote the opinion of the court in which he dismantled the arguments presented by opponents today.

In his extensive and detailed opinion, the Justice noted the Constitution must be considered in the light of what contemporary citizens of that time would have understood it to mean. Therefore, the term “militia” meant anybody who could be called up to service, meaning that the word “people” covered a wider scope, not a narrow one.

Justice Scalia also took apart their reasoning of applying it to those who like to hunt instead of the general public. To paraphrase what he said, one cannot claim an argument of strict interpretation like for militia use only and then try to carve out a narrow exemption to please the masses.

The long and short of it is really this: the Second Amendment conveys the right to protect oneself from a prospective overbearing government and a thug on the street, not just in service of the potentially-abusive state. After all, if only people who are employed by the officials in Washington, DC are allowed to own guns, their ability to turn the country into an oppressive regime becomes nearly unchallenged.