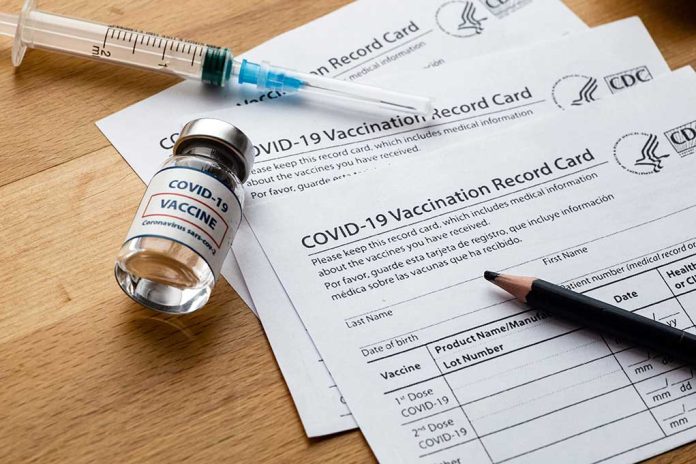 (WatchDogReport.org) – New York City has required all public employees to receive the COVID-19 vaccine. There’s been a lot of pushback over the mandates, and others are trying to find alternative ways around the rules. That has landed some workers in hot water.

On Monday, November 15, the NYC Department of Sanitation confirmed it had launched an investigation into allegations that employees have been using fake vaccine cards. Assistant Commissioner for Public Affairs Joshua Goodman told CBS News the department took the allegations “very seriously” and said it would “not tolerate anyone faking” a requirement for employment. Several dozen workers were subsequently suspended without pay.

The workers allegedly submitted vaccine cards showing they’d been vaccinated at a CVS Pharmacy with a single dose Johnson & Johnson COVID-19 shot. However, the pharmacy had not administered those vaccines in at least six months, making it impossible for them to have received the one-shot vaccine there. Officials are now trying to figure out whether money exchanged hands.

The workers were reportedly trying to get around the vaccine requirements. They didn’t want to lose their jobs, nor be forced to get the shots. Republicans have long held Americans should not be forced to undergo medical procedures, no matter how small, that they do not want. Unfortunately, Democrats do not feel the same way, and now these workers are suffering without pay before the holidays because of draconian mandates.

Juror Mysteriously Comes Forward, Could Lead to a Way Out for...

Unbelievable: Biden’s Midnight Migrant Flights Across the Country Ramp Back Up