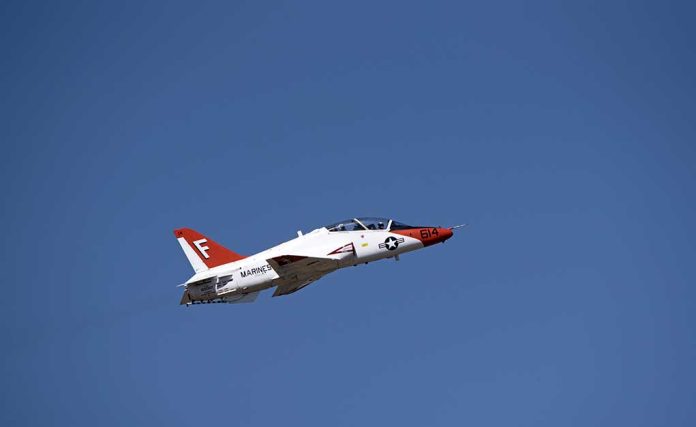 (WatchDogReport.org) – On August 31, a helicopter crash off the coast of San Diego killed five members of the US Navy. Less than a month later, another military flight crashed in Texas.

On Monday, September 20, a T-45C Goshawk jet trainer assigned to Training Air Wing 2 at Naval Air Station Kingsville crashed in a Lake Worth neighborhood. The US Navy said the plane was on a routine training mission from Corpus Christie when it crashed. The pilots were able to evacuate before it touched down in the backyard of a home.

Lake Worth Police Chief J.T. Manoushagian said they found one pilot nearby and the other caught in power lines. The pilot in the power lines went to the burn unit at Parkland Memorial Hospital in Dallas by helicopter, where he’s listed in critical condition. Witnesses told the Star-Telegram his flight suit caught fire.

“Although badly burnt, the pilot was conscious, alert and breathing,” Lake Worth police said.

The other pilot suffered serious injuries, though not life-threatening.

In addition to the pilots, three people in the neighborhood suffered injuries.

Three homes sustained damage from the crash. The Red Cross is helping families who are now displaced. Other homes are reportedly affected by debris and smoke from the crash as well.

The military is investigating the cause of the crash.