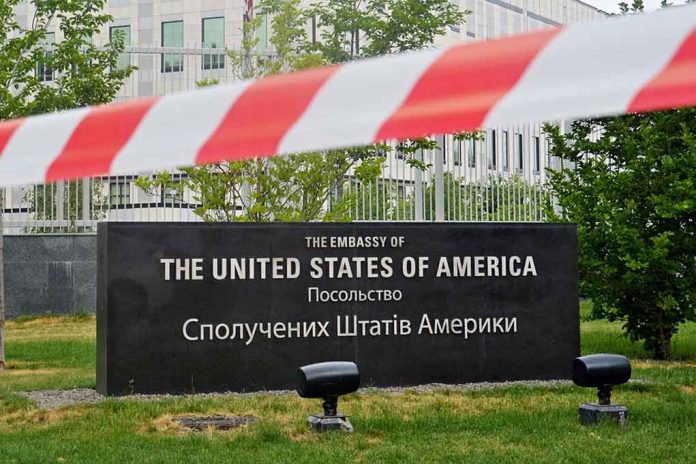 (WatchDogReport.org) – August 24 marked exactly 6 months since Russian President Vladimir Putin renewed his invasion of Ukraine; it’s also the 31st anniversary of the day the country declared itself independent from the Union of Soviet Socialist Republics (USSR). With that in mind, the United States Embassy in Kyiv renewed its warning to American citizens to get out of the country because they had “information that Russia is stepping up efforts to launch strikes against Ukraine civilian infrastructure….”

Ukrainians on Wednesday will mark 31 years since they broke free from the Russia-dominated Soviet Union and six months since Russia's invasion. The U.S. Embassy in Kyiv issued a new security alert, urging U.S. citizens to leave the country https://t.co/eMKoerir2W pic.twitter.com/RCdjECW5Wy

It appears the intelligence the embassy was able to obtain was accurate — Russian forces launched a rocket attack on the Chaplyne train station in the Dnipropetrovsk Oblast. It’s an industrial hub adjacent to the Donetsk Oblast, which has been held by Russian-backed separatists since 2014.

Ukrainian President Volodymyr Zelenskyy spoke of this attack, saying that there were at least 22 dead and at least another 50 wounded. He spoke of an 11-year-old boy who was killed — not at the train station, but while he was at his home, which blew up.

Officials also told of air raid sirens blaring throughout the country, including at least eight different times in the capital city of Kyiv. On this double anniversary, Rosemary DiCarlo with the United Nations (UN) announced at least 5,600 civilians had been killed and another nearly 8,000 injured since the invasion began. She also acknowledged those numbers are probably significantly lower than the truth.