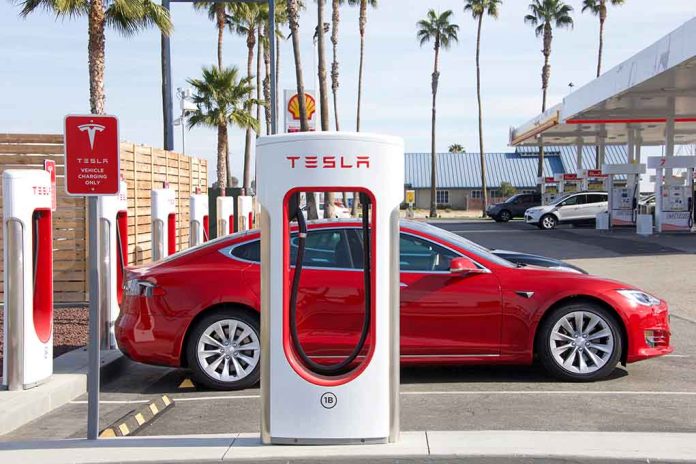 (WatchDogReport.org) – Tesla manufactures luxury electric vehicles (EVs), with the most expensive models selling for $125,000 and more depending on model, trim, and accessories. One owner hailing from the United Kingdom (UK) is sharing a less-than-enjoyable experience he recently had in his on a roadway near London.

Automotive influencer Tom Exton, who has more than 34,000 Twitter followers, and 242,000 subscribers to his YouTube channel, let them all know what happened to him. He posted a video titled “My Tesla Nearly Killed Me —The Truth,” telling his fans how his five-day-old Model Y advised him to pull over because it was shutting down, which it did, and left him locked inside.

Without power to the vehicle, the doors would not unlock, so he was forced to use the manual release mechanism, which he says “somehow broke the window.” Exton is not the only one to have found himself sitting in a Tesla on a major highway without the power to move the car.

Dr. Dana Brems, DPM, took to her Twitter to explain the experience she had with her brand-new Model 3 she claimed showed it still had 140 miles left to drive on the battery, and wrote how Tesla’s customer service blamed her for the incident. Her story was picked up by autoevolution.com, where she explained she was driving on the I-5 near Camp Pendleton in Southern California in the left lane, just past a blind turn, when the car shut down.

Both Brems and Exton spoke with customer service reps with varying degrees of success, but it does not appear Tesla has made any public comments.