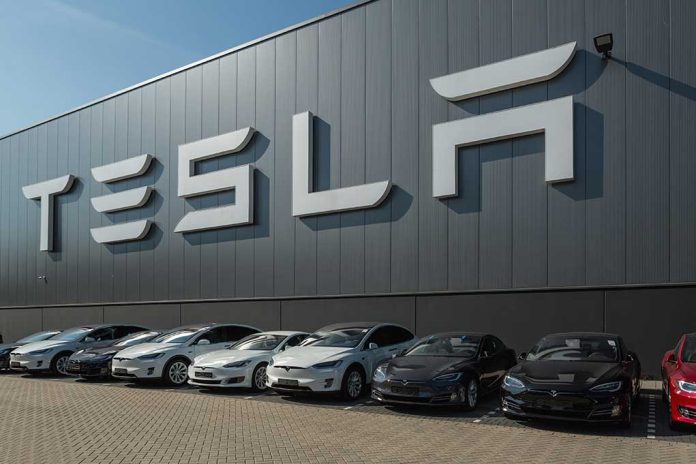 (WatchDogReport.org) – When the Sacramento Fire District responded to a fire at a local junkyard, they found a Tesla completely engulfed in flames. The white Model S had reportedly spontaneously combusted, and putting out the fire was no easy task. After several hours and more than 4,500 gallons of water, they managed to extinguish the blaze.

Thinking Outside the Box

Firefighters used “a significant amount of time, water, and thinking outside the box,” according to a department Facebook post. The problem with a Tesla fire is the lithium-ion battery. Tesla’s manual for first responders states that a fire involving the battery, which is mounted in the floor of the car, could consume between 3,000 and 8,000 gallons of water to extinguish, and take as long as 24 hours.

As firefighters fought to put out the flames, the battery continued off-gassing and reigniting. Junkyard workers turned the vehicle on its side so the water could have more direct contact with the overheated cells, but ultimately, they were forced to dig a pit and submerge the burnt-out vehicle in water. The pit also minimized the potential runoff of contaminated water.

Not a unique situation

This certainly isn’t the first time a Tesla burst into flames. A fire in a driveway in Pennsylvania leaped to the attached garage, putting the entire family at risk. Luckily, firefighters put that blaze out quickly and nobody was hurt. Another Tesla fire, this one while driving, sent a man hurtling from the vehicle when he smelled smoke and felt the heat. The car kept going for about 40 feet and erupted into flames. The Model S Plaid was touted as being as fast as a Porsche and as safe as a Volvo.

Batteries Not the Only Problem

While spontaneously combusting lithium-ion batteries may seem like a problem to beat all problems, Tesla has actually seen worse. The coveted auto-drive system, which allows drivers to relax and let the car do the work, is already responsible for multiple deaths. A driver was charged with vehicular manslaughter in January when his auto-drive feature took him through a red light, killing two people.

In November of last year, two men in Texas died after they decided to let auto-drive do all the work. Without anyone in the driver’s seat, the car took a curve too fast, crashed, and burst into flames.

The National Highway Transportation Safety Administration is concerned enough about auto-drive that it seeks to have all automakers add a black box-style recorder to any vehicle with the feature so it can investigate and research the new technology’s faults. All crashes involving auto-drive must be reported to the agency within 24 hours.

With all of the issues Tesla has with safety, the difficulty its cars present first responders, and the potential for auto-drive disasters, it would seem the world may not be quite ready to dump the internal combustion engine just yet.