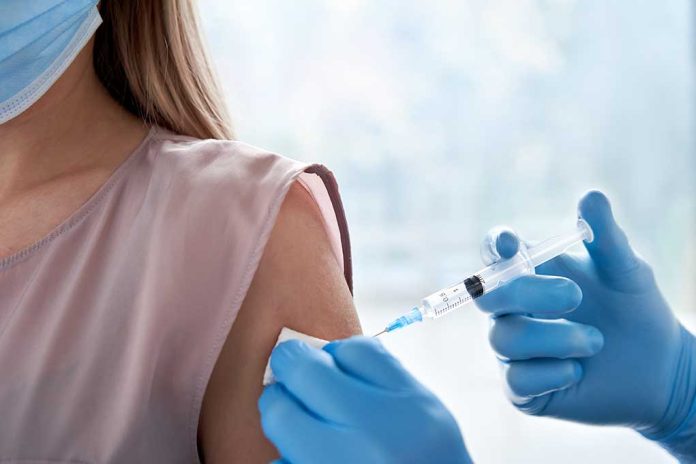 (WatchDogReport.org) – The great thing about America is that people here have freedom of choice. They don’t have to have any procedure done to their bodies that they do not want. Even when they are dying, Americans are allowed to refuse extraordinary treatment that could save their lives.

So, when the COVID-19 vaccine began rolling out and Democrats started talking about mandatory vaccinations, many people got nervous. The idea that the government could force them to undergo a medical procedure was a foreign concept. When President Joe Biden made it clear that he would not issue a mandatory vaccination order, some started talking about vaccine passports.

These “passports” would allow businesses to see proof that someone got the vaccine and deny entry to those who didn’t. Essentially, it would have forced people to get the vaccination if they wanted to lead normal lives without actually mandating the vaccine. It was a perfect little workaround to the president’s refusal to mandate it — until Republican leaders took notice. A number of states have banned the “passports” and, right now, lawmakers in Pennsylvania are trying to as well.

On Wednesday, June 23, the Pennsylvania House of Representatives advanced a bill that will ban vaccine passports in the state. Senate Bill 618 would prohibit public entities from requiring proof of vaccination from people. Although the state Department of Health has said they do not plan to implement a policy like that, Republican state Senator Kristin Phillips-Hill wanted to be proactive.

Phillips-Hill said the state has not proved it could handle the “personal healthcare information” of people within the state. They showed that when they failed to properly do contact tracing during the pandemic. A vaccine passport would be a “bridge too far” she explained, so she wants to make sure that won’t ever happen.

Democratic Governor Tom Wolf has said he will veto the bill if it makes it to his desk. Republican lawmakers seem unbothered by the threats and pushed ahead with it anyway.

My Body, My Choice

What’s so ironic about the idea of mandatory vaccinations and vaccine passports is the Democratic Party is constantly saying they support body autonomy. They claim to believe that a person has complete control over their bodies. It’s the excuse they use when they’re debating abortions. It seems that the whole “my body, my choice” argument flew right out the window when they started talking about vaccines.

The American people have enough information about the vaccine to make a decision that works best for them. The state should not force them to do anything, and that’s why Republicans are fighting back.