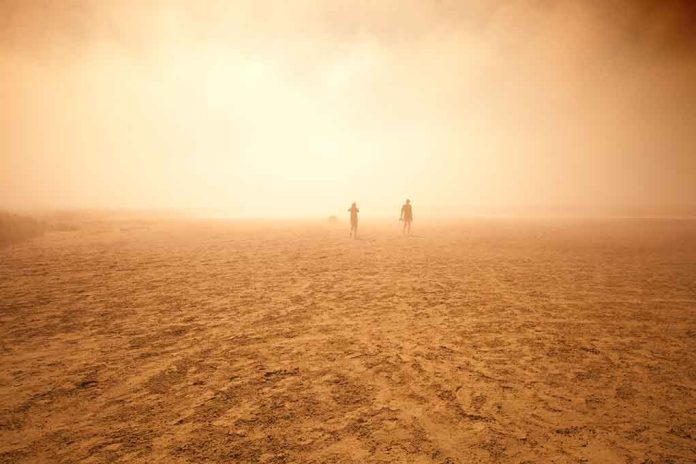 (WatchDogReport.org) – Thousands of Iraqis were hospitalized this week after a freak sandstorm blew across the country, smothering its capital Baghdad in orange dust. Schools were closed, flights grounded, and government offices shut down. The dust is predicted to spread as far as Northern Europe.

5,000+ people in Iraq were hospitalized for breathing problems after a severe sandstorm, the 7th in a month, linked to drought.

Experts predict the climate crisis will cause a 20% drop in water resources by 2050, risking food shortages in a country where 1 in 3 live in poverty. pic.twitter.com/TLLsjaGln8

Since early April, a huge low-pressure area has sat over much of North Africa and the Middle East. This weather phenomenon is known as a “khamaseen” from the Arabic word for “fifties,” as it usually lasts around 50 days. While it lasts, it generates powerful winds that sweep sand and dust from the region’s deserts in huge quantities.

The dust kicked up by this khamaseen is spreading over huge distances; the British Met Office is warning of “blood rain,” caused by the red African dust mixing with rain as it falls. But, while it’s just an odd weather event 2,500 miles away in Britain, it’s a catastrophe in Iraq.

On May 16, an enormous dust storm swept most of Iraq, causing disruption across six provinces and the capital. Journalists reported dense clouds of orange dust that cut visibility down to a few hundred feet, forcing Baghdad International Airport to close. At least 5,000 people needed medical treatment after inhaling the fine dust, which can cause respiratory problems and even cardiovascular disease. It may even be laced with pesticides, bacteria, and viruses.

The khamaseen has played a role in the region’s history. The French emperor Napoleon was almost defeated in 1798 after a khamaseen left his army blinded and choking, while several WWII battles between the Germans and Allies had to be abandoned when the sandstorms moved in. Now, the khamaseen is showing that it’s just as bad in peacetime.