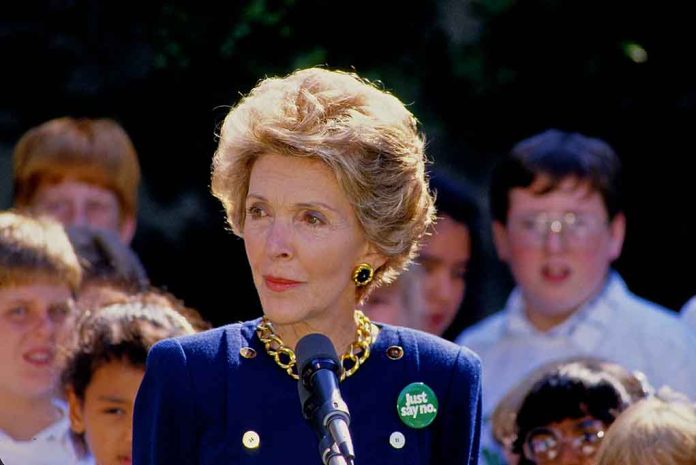 (WatchDogReport.org) – Nancy Reagan, who originally had the last name of Davis from her stepfather who adopted her, spent years as a stage actress before eventually heading to Hollywood to begin her career on the silver screen. As time marched on, she eventually met another famous actor whom she married, which she is quoted as saying was when her “life really began,” and that man was The Gipper — Ronald Reagan. It has been announced that First Lady Jill Biden will host a ceremony unveiling a United States Postal Service stamp honoring her predecessor.

During her years at the White House, 1981 to 1989, Nancy Reagan used her public position to advocate for two causes that were important to her. The most well-known was the “Just Say No” campaign, which aimed to keep children from using illegal and recreational drugs by giving them a set of tools to stay off that path.

Nancy was also very outspoken on the “foster grandparent program,” which she brought to the White House from the time when her husband was the governor of California (1967 to 1975). In her 1982 book “To Love a Child,” she let the world know about this program that’s still going strong today. It gives senior citizens a sense of purpose, and — as the title of the book points out — physically disabled and at-risk youth get a sense of that much-needed emotion.

Soon, the country will be able to remember Nancy Reagan’s legacy via these commemorative stamps along with other American heroes.