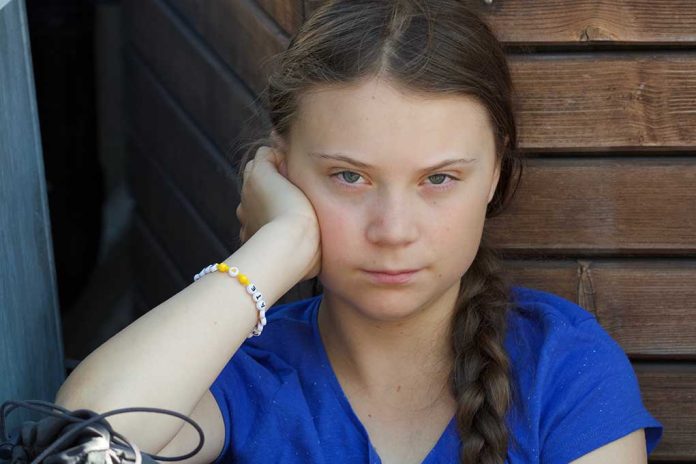 (WatchDogReport.org) – The idea of a social activist being arrested for their beliefs is not unusual; one famous example can be seen with world champion boxer Cassius Clay (aka Muhammad Ali), who chose arrest and the loss of his titles rather than fight in the Vietnam War. With the proliferation of television cameras everywhere, and now smartphones that capture nearly everything, politicians and celebrities can be assured of being seen at events about their cause of choice.

The constant presence of video recording devices can, however, sometimes catch things that can make it seem as if the celeb had staged a confrontation in order to make themselves go viral.

In this instance, climate change activist Greta Thunberg was seen being arrested by police while protesting at a German coal mine. While that certainly made headlines around the world, it’s the video taken before she is marched away that is raising some eyebrows among conservative sources.

LMFAO Greta literally staged being arrested for the cameras.
pic.twitter.com/qGNurU0lrO

In the video, Thunberg is seen standing between two police officers, with a smile on her face and even laughing, with all of them seeming to wait on a photographer to get in position. This has caused some to speculate it was all a setup to get more views and “likes” on social media platforms, a charge that she, the police, and the liberal mainstream media are vehemently denying.

The imagery sparked a recollection of Representative Alexandria Ocasio-Cortez’s (D-NY) video of being escorted away by police during a protest in front of the United States Supreme Court (SCOTUS) after the ruling in Dobbs v. Jackson Women’s Health Organization overturned Roe v. Wade. Video of the event showed her with her hands clasped behind her back as if she was handcuffed, which critics condemned as an attempt to make it appear more dramatic than it was for the cameras.