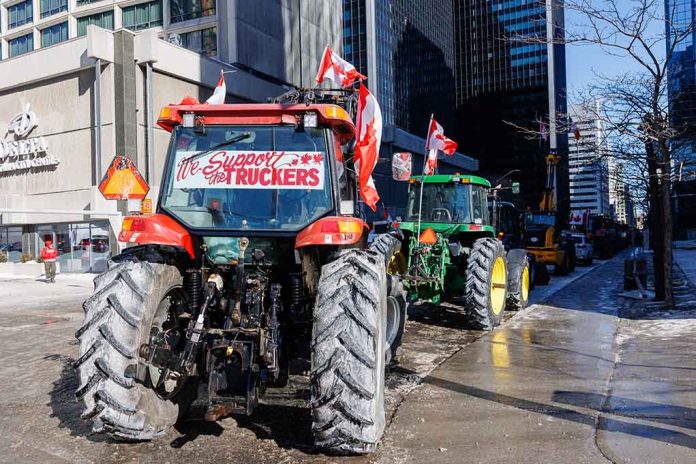 (WatchDogReport.org) – Canadian Prime Minister Justin Trudeau continues to take a hard-line stance against the truckers involved in his country’s “Freedom Rally.” The convoy of truckers and people supporting them have created a difficult situation for Trudeau, whose response grows more extreme with each passing day.

The latest reaction is a promise by Trudeau’s Justice Minister, David Lametti, to seize the bank accounts of certain people who support and donate to “pro-Trump organizations.” The move comes as a response to the news that more than half of the money sent to support the truckers came from the United States, from largely pro-Trump people and organizations.

Social media giant Meta joined the action by removing groups from its Facebook platform, which consisted of more than 300,000 accounts showing support and raising money for the convoy.

The Canadian federal government is using the Emergencies Act, similar to a US state of emergency. Only, this isn’t for hurricane relief or other natural disasters, but for a convoy of truckers protesting for their freedom, which is ridiculous in itself considering Canada’s constitution allows for freedom of expression.

Under the act, Trudeau has said he’ll freeze convoy funding, including personal accounts if they qualify, to stop the flow of necessary cash used to keep the truckers and their families safe and fed. Considering Canada has no jurisdiction in the US, it seems unlikely this will ever come to fruition here, but the fact that Trudeau and Lametti are making these threats is definitely cause for concern.