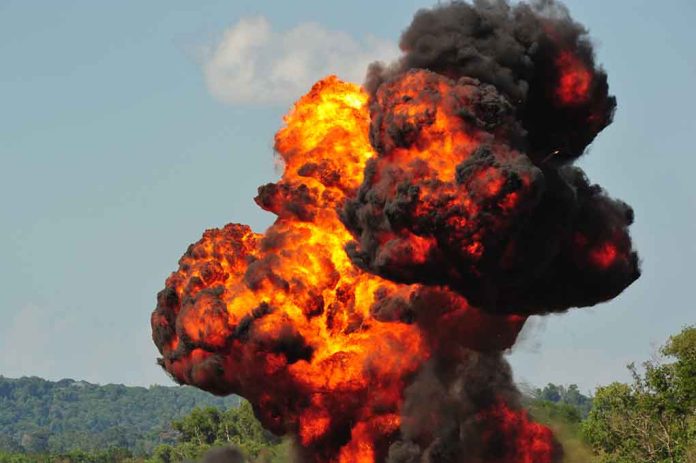 (WatchDogReport.org) – To state the obvious, life can change in an instant, often through no fault of one’s self. Dozens of people are experiencing that now after the home at 1010 N. Weinbach Ave. in Evansville, Indiana, exploded, throwing smoke and debris high into the air. The footage was captured by doorbell cameras in the area.

Dramatic doorbell footage captured the moment of an explosion in Evansville, Indiana, that killed at least three people on Wednesday. According to authorities, the explosion damaged 39 homes and rendered 11 homes uninhabitable. https://t.co/RXxzCIn2OW pic.twitter.com/xY5XSqy18s

The home’s occupants, Charlie Hite, 43, and Martina Hite, 37, were both killed in the blast, along with their neighbor Jessica Teague, 29. The blast was so powerful that it has reportedly left at least 11 other buildings in the area uninhabitable or unsafe for use, including the nearby Community of Christ church.

Officials investigating the cause of the explosion said that a total of 39 buildings suffered some kind of damage. They also advised that residences within a few blocks of the home will be without natural gas and electric service until the investigation is complete.

Although no cause for the explosion has been determined yet, tragedies like this can be brought on by natural gas and propane leaks inside a dwelling. One step people can take to reduce the chances of problems from gas leaks is to have their furnace inspected during late summer and early fall.