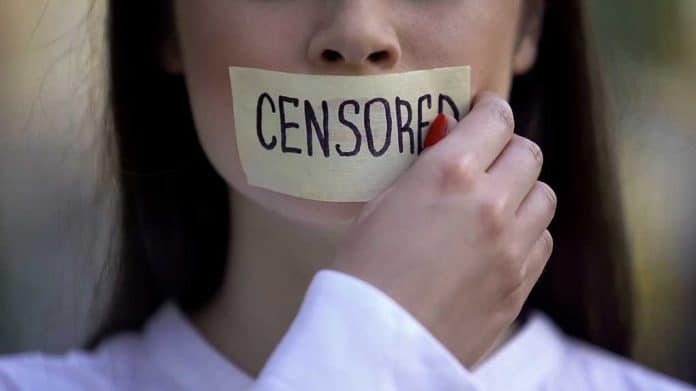 (WatchDogReport.org) – Media censorship, both on traditional platforms and the internet, is one of the most controversial issues of modern times. Republicans believe they’re being censored, and for good reason; former President Donald Trump was banned from Twitter while he was still in office.

The GOP has pushed hard for reforms to stop the censorship, but has been unsuccessful thus far. Meanwhile, President Joe Biden recently called on companies to silence people when it came to certain COVID-19 posts and opinions.

On Thursday, January 13, Biden gave the American people an update on the COVID-19 pandemic. The president said the military, which has been helping at hospitals, is “stepping up,” but other people are “standing in the way,” referring to those not complying with his push for all Americans to receive vaccinations for the virus. He went on to say the personal choices people are making to not get the COVID-19 vaccine is impacting everyone in the nation; this despite reports of rising rates of infection in fully vaccinated Americans.

Biden then appealed to the media and big tech platforms to clamp down on certain discussions. He asked companies to stop the alleged “misinformation and disinformation” spread by guests on their shows or their platform users, which translates to a call to monitor associations and communications, and to remove unapproved information from their websites and platforms.

Given conservatives’ complaints about the free speech concerns associated with the current censorship regime, we will no doubt hear protest from opinion-makers and media personalities on the Right condemning calls for further silencing of speech on the internet.

What He Didn’t Mention

Biden failed to mention that the Omicron variant, which is fueling the most recent wave, isn’t just infecting the unvaccinated. His very own chief medical adviser, Dr. Anthony Fauci, speaking to J. Stephen Morrison, the Center for Strategic and International Studies’ senior vice president, said that the new variant will infect “just about everybody.” The vaccinated are getting the virus too.

If the vaccinated are getting the illness, that means they’re also spreading it. As science has already shown, those who received the vaccine are just as contagious as those who didn’t. So, the president’s statement is demonstrably wrong.

Further, when the president asks companies to censor Americans with whom he disagrees, he’s skating a fine constitutional line. The First Amendment protects from government censorship. What Biden is trying to do is skirt the Free Speech clause by not passing a law that violates it himself, but encourages private companies to silence the opposition.

Biden’s remarks demonstrate that he not only doesn’t understand the basic science of the virus (or he’s purposely ignoring it), but also that he doesn’t appear to respect the First Amendment.

What do you think about the president’s remarks? Let us know.

Cause of Death Released for 3 Americans Found in Bahamas