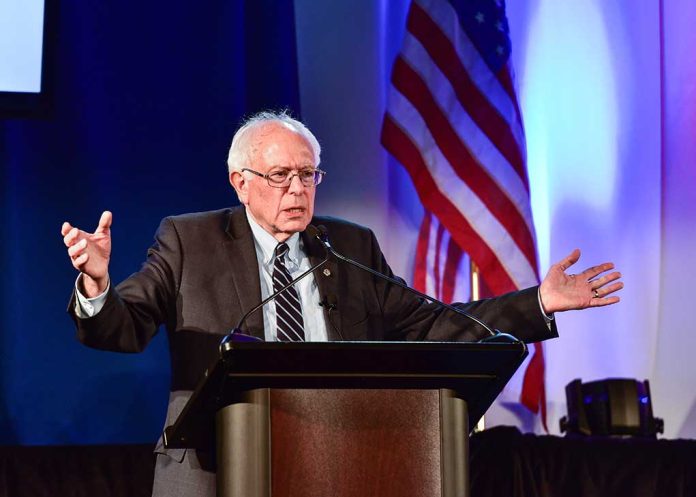 (WatchDogReport.org) – Antique socialist Senator Bernie Sanders (I-VT) is a hero to many on the American Left. But, mainstream Democrats are starting to see him as a loose cannon and a liability, mostly because he holds very strange views on what’s acceptable in a democracy.

On October 4, pro-immigration activists followed Senator Krysten Sinema (D-AZ) into a restroom and harangued her over her opposition to the Biden administration’s bloated spending plans. Most people, including a majority of Democrat lawmakers, found the incident appalling.

Senator Cory Booker (D-NJ) drafted a letter of condemnation in support of Sinema. Senators rallied to sign the statement – until someone asked Bernie Sanders.

An email exchange between Senate Democratic leadership aides, obtained by Axios, reveals Bernie Sanders withheld his name from a statement condemning protesters who followed Kyrsten Sinema into a bathroom. https://t.co/Cpg6qrDLix

Unbelievably, Sanders refused to sign a statement of support for Sinema unless it included criticism of her political views – a demand Booker rightly rejected. In response, Sanders’s communication director Mike Casca said “Sanders will not be signing, so please cut ‘Senate Democratic Leadership Team’ from the headline.”

It’s typical of Sanders to put political stunts and his hard-left agenda ahead of supporting an elected lawmaker’s right to vote with her conscience. Yet, it’s also dangerously extreme.

Sanders has repeatedly criticized Sinema and Senator Joe Manchin (D-WV) for refusing to support Biden’s $3.5 trillion reconciliation bill, arguing that “one or two people” shouldn’t be able to block the spending package. Sanders refuses to accept that it isn’t “one or two people” blocking it; it’s a majority of the Senate.

Democracy is working the way it’s supposed to – which is why Sanders is now siding with bullies and extremists.